Drink, Pour, or Put a Lid on It

Managing time is difficult, with so many things (people, tasks, responsibilities, digital devices, and social media, just to name a few) demanding a piece of it. Several years ago, I wrote an article called, “Drink, Pour, or Put a Lid on It,” using the idea of water as an illustration of time, with three ways to manage it.

The article turned into a workshop, which I have since delivered to groups of senior and mid-level managers.

The workshop begins with a demonstration using an empty glass, a pitcher of water, and a lid.

First, I fill up the glass with water, representing the items on your To Do list for a day.

The quickest way to chip away at that list (or empty the glass) is Do something!  Drink some water. Get some of those things off your to-do list by actually doing them. Check them off. Done!  It’s a great feeling.

Then, when things pop up – like a new deadline, a crisis, an interesting project, or lunch with an old friend – you’ll have room in the glass to say “yes” without the stress of an overloaded schedule.

Glass getting too full?

Pour out some water, which is essentially delegating. This sounds easy, but there are many reasons we don’t delegate.

Here are some of them. Have you ever said or thought any of these?

You can add your own to the list, but pouring is another way to make room in your schedule.

What if you are a business owner and don’t have a team to which you can delegate work?

Use technology, spreadsheets, calendars, and apps to manage and analyze data.

How about outsourcing? Do you need to do this at all? If it has been on your to-do list for several months, is it really worth any effort—for you or anyone else?

If not, ditch it. Cross if off.

Put a Lid on It

The workshop was going well until I got to the last point – “Put a Lid on It,” which is all about how to say, “No.”

To demonstrate, I put a lid on the glass and poured water over it. Of course, the water spilled over the lid, but it did not add to the water in the glass.  Sometimes you have to set boundaries for yourself and just say No!

Drink and Pour were okay, but saying, “No” made the room uncomfortable.

I shared some scripts for nicely saying no to people who create emergencies by not drinking (doing) and pouring (delegating).  What happens when you keep saying yes? You end up with the glass overflowing with other peoples’ responsibilities.

The participants were still skeptical. The fear of disappointing someone, not being a team player, or not appearing “nice” was worse than being overloaded with someone else’s work.

“Putting a lid on it” has been one of the best lessons I have learned in my career.

I have learned to respect myself and my time without disrespecting anyone else. Saying “no”is a stress reliever, allowing me to use my time and energy for those matters which are a priority for me and truly important.

If you don’t put a lid on your glass once in a while, you become the open vessel everyone else can dump things into. If you have no boundaries, the gates are open wide.

“Being kind” to everyone else by overloading yourself ends up hurting the one person who matters most…You!

This may sound harsh (as one workshop participant put it), but think about it. What good are you as a worker, supervisor, manager, director, or CEO if you’re so bogged down with everyone else’s priorities that you don’t have time to do what you should be doing?

One of the greatest lessons I learned as a new supervisor came after my director said “no” to taking back a project at which I had failed. Instead, she gave me a few pointers and sent me back to figure it out. I did, and ended up getting the praise and recognition for completing the project, and a huge boost of confidence.

Drink, Pour, and occasionally Put a Lid on It!

The last technique may be difficult, but it is also the most effective. Get good at Putting on that Lid, and you’ll be amazed at how much more time you have to Drink and Pour. 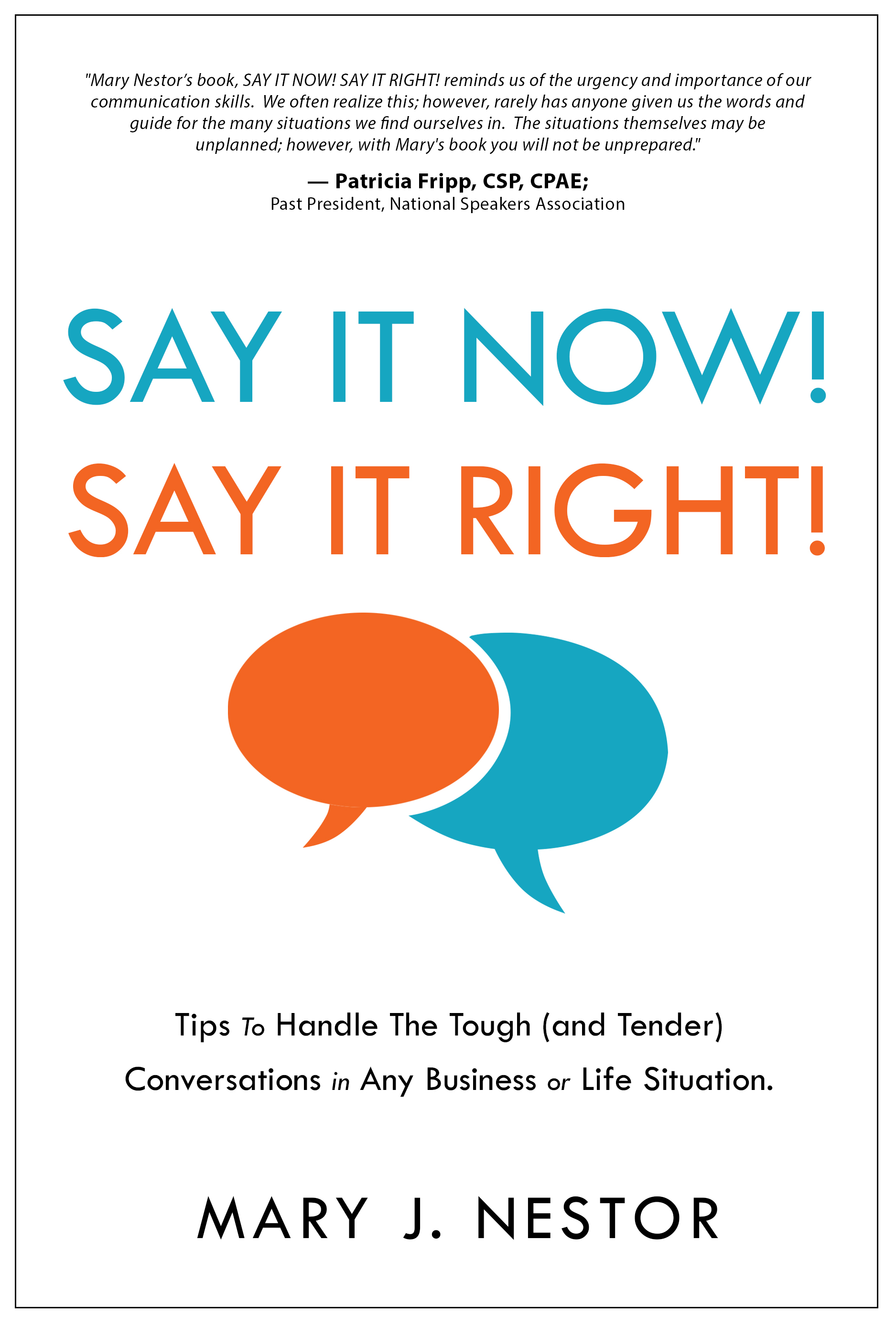 ​A Free Chapter ​of
SAY IT NOW!
SAY IT RIGHT!

Sign up below to get ​your FREE chapter of the book.

Mary J. Nestor, The Courageous Communicator, is the author of Say It Now, Say It Right! Tips to Handle the Tough (and Tender) Conversations in Any Business and Life Situation (Motivational Press 2016). She transforms individuals into courageous communicators, resulting in dramatic growth, creativity, and enthusiastic collaboration at all levels of an organization. For more information, contact Mary at maryjnestor.com. #maryjnestor #sayitnowsayitright

Previous Post: « Ten Tips to Take the Torture Out Of Meetings
Next Post: In Business, the Eyes Have It » 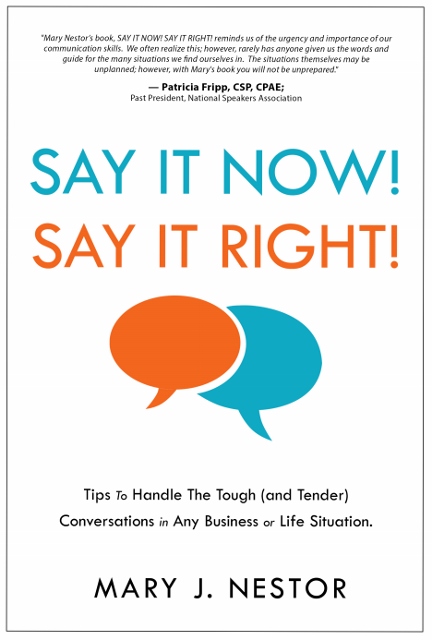 Sign up below to get ​your FREE chapter of the book.